It may only be November but we are delighted to announce that we were able to book Santa himself for an event in Newcastle over the weekend! You might be thinking that it’s a little early to be celebrating Christmas but for those in the know, Santa’s diary gets booked up quite heavily the nearer we get to December so this was the only time he was available. The result was that Fenwick’s just had to reveal their festive window display last weekend!

Fenwick is a department store in Newcastle that has nine locations across the country. The original store opened on Northumberland Street in 1882 and since 1971 has been known for its extravagant Christmas window displays. When we heard that the department store was looking for a special guest to help unveil this year’s display, we were only too happy to help! 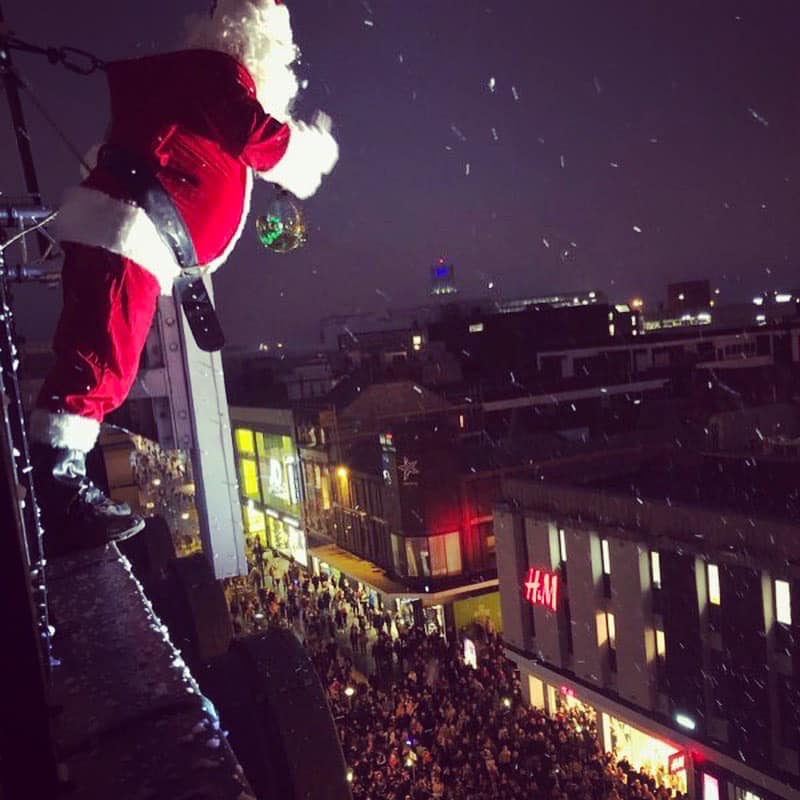 After a quick call to Santa, it turned out that the first weekend in November was pretty much all he could do before ramping up production on the presents in the North Pole. As such, the store announced the date of the proceedings and we kept his special guest appearance on the down low. There were to be no reindeer for this particular event; the mere sight of them would surely have been a giveaway that Father Christmas himself was in town.

As the crowds gathered, Santa received his instructions. He didn’t have to do any meeting and greeting and certainly didn’t have to go down any chimneys. No, for this particular appearance he merely had to wave from way up on high, right beside the Fenwick sign. Although Santa is experienced and adept at jumping from roof to roof, due to health and safety guidelines in the UK he had to be tethered in place. We didn’t want a ‘Santa Clause’ problem on our hands if anything were to go wrong!

Eventually the moment of truth arrived, the window display was unveiled (at the third time of asking due to some pesky malfunctions) and the Fenwick display was  revealed to be themed around Charlie and the Chocolate Factory with Quentin Blake’s illustrations beautifully brought to life in an animatronic display, which you can see below via Rachel’s Next Adventure on YouTube. And who was waving down from up on high? That’s right, Santa himself!

It was an absolutely wonderful event and we were only too happy to work with Fenwick and Santa on this exclusive appearance. Roll on Christmas and we hope the people of Newcastle enjoy a stunning window display for the next eight weeks.