Back in November 2015, Trevor George Entertainments merged with London’s leading supplier of entertainment for events, Sternberg Clarke. To celebrate the coming together of these two entertainment powerhouses, we welcomed a selection of clients and suppliers to Blackpool for a showcase that illustrated just what you can do with the combined expertise of two of the UK’s biggest and best entertainment agencies.

Kicking things off were dance troupe The Works, who opened the show in spectacular fashion with a high-kicking dance routine. We were then handed over to multi-talented compere for the evening Michael Jordan and his variety act High Jinx, Michael popped up throughout the evening performing everything from large-scale stage illusions and classic card tricks, to juggling and plate-spinning. 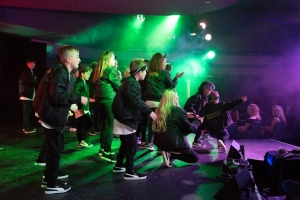 International singer Emma Wright took the stage next with a powerful performance of “Skyfall” followed by covers of Lulu and Etta James, all delivered with supreme confidence thanks to her commanding stage presence. Next up was a complete change of pace from Princess Parties, a troupe of performers who utilise an amazing range of authentic Disney princess costumes to put on an all-singing all-dancing show that goes down a treat at kid’s parties. And for boys and girls who might prefer their heroes a touch more dynamic, their super hero breakdancing act pays tribute to everyone’s favourite costumed crusaders. 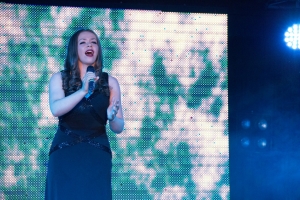 Super Nova premiered a sensational new speciality performance for the crowd, featuring programmable LED costumes and hoverboards in a brilliant choreographed routine. With the ability to pre-programme costumes with patterns, messages and even company logos, we can see this being a huge draw for anyone planning product launches or corporate events. Acclaimed Scottish vocalist Catherine Kerr was up next with a set that covered everything from pop to showtunes, giving the audience a great demonstration of her impressive vocal range. 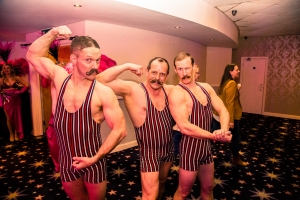 Taking the audience on a dizzying journey through the circus in a matter of minutes, Cirque de Viva saw performers from High Jinx and the Theatreworks, joined by the brilliant strongman troupe Acro Chaps. With dancing, plate-spinning and even an aerial hoop show all in startlingly quick succession, this was going to be a tough act to follow. Thankfully the performers tasked with closing the first act were more than up to the challenge. The brilliant Ali Temple and Klodi delivered a scintillating mixture of acrobalance and contemporary dance that had the audience in rapt silence. 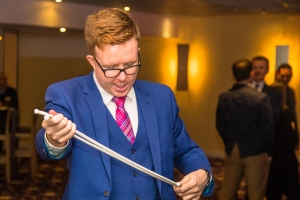 After a short break, we were back with the second act and a high-energy performance from the Urban Dance Project (or UDP) whose explosive mix of breaking and hip hop dancing was the perfect way to pick things up after the intermission. Next up we welcomed Molly Fairclough to the stage who, after a soulful opening number, kicked things up a gear into full-blown showgirl mode, joined by The Phil Winston Dancers for a performance fit for the Vegas strip. 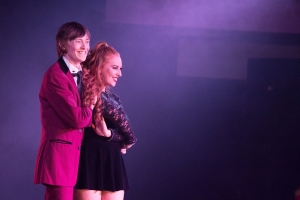 The Divas were up next, an all-female vocal harmony quartet featuring four truly breathtaking voices coming together for a sensational performance. After some card magic from High Jinx, we had a mesmerising glow hoop show from dancer Stephanie Divine, whose ethereal glow-in-the-dark costume and graceful moves had the crowd spellbound. 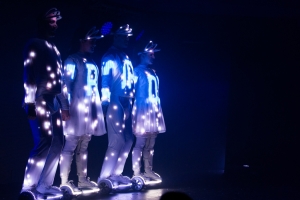 Next up, not one, not two but three amazing tribute acts from some of the best singers on our books. First up was Lisa Heesom as Celine Dion, performing a rendition of “My Heart Will Go On” alongside a choreographed dance routine. Lisa was followed by The Jerseys, an up-tempo tribute to Jersey Boys and the music of Frankie Valli and the Four Seasons. The group’s soaring harmonies and playful dance routines were the next best thing to seeing the hit West-End show. Debbie Farrell then took to the stage as Dame Shirley Bassey 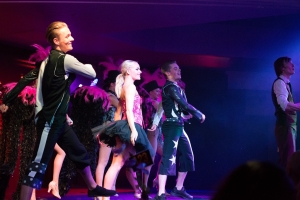 The penultimate act was a also a tribute act of sorts, impressionist Danny Posthill made a name for himself as a contestant on Britain’s Got Talent, wowing the judges with his spot-on impersonations and making it all the way to the finals. He showed that he’s lost none of knack for entertaining a crowd with a hilarious set sending up the likes of John Bishop, David Beckham and BGT judge Michael McIntyre. 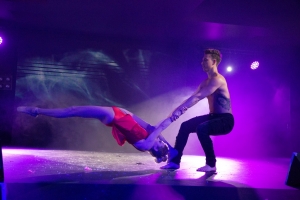 Finally the cast were welcomed back on stage alongside The Divas to bring the curtain down in style with “The Last Dance”, giving the guests a chance to show their appreciation for an evening of fantastic performances. The evening was a roaring success but most importantly, a brilliant way to kick off a new era for Sternberg Clarke and Trevor George. Here’s to many more like it!