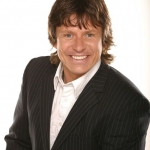 A compere, comedian, TV presenter, and singer; Steve Wells is the ultimate all round entertainer. The affable Geordie also counts musical theatre and voiceover work among his many talents. His broad skillset has given him the opportunity to travel the globe, performing on cruises and at some of the world’s most luxurious hotels.