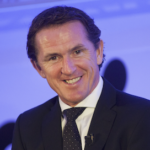 He’s since swapped the whip for the microphone, working for various broadcasters on their racing coverage, but also finds time to offer his services as a motivational speaker at events. His unrivalled insight, humour and personality endear him to any audience. With no shortage of laughs, gasps and riveting anecdotes from his time in the saddle, Sir Anthony guarantees a lively and fascinating evening’s entertainment.