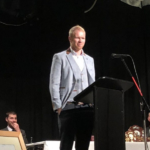 He was first dubbed the Epic Runner back in 2012, when he ran 50 miles every day for 50 days. But the truth is that he’d been trying to outrun limitation and expectation long before then.

Leaving school with just a single GCSE, he’s now a full-time maths teacher at a secondary school in Bradford. Ever since he changed the course of his own life, he’s been driven to share the message – with his pupils and with anyone facing challenges, difficult times or their own self-doubt – that anything really is possible.

In the summer of 2017, he swapped the classroom for the open road and with a couple of pairs of trainers and a second-hand bike, he covered 3,000 miles crossing America coast to coast in 32 days.

Running 50 miles one day and cycling 150 the next, the journey took Sam through 14 states and brought his fundraising total for Help for Heroes to £30,000. From running through a gangland standoff in New York City, to meeting a couple doing their shopping on lawnmowers and ending with his wedding in Vegas, the journey was epic in every way.

And it doesn’t stop there. His sights are always set on the next challenge and he is forever on a mission to inspire people. Be it the pupils in his class, readers of his books or the audiences who come to hear about his adventures, the message is the same: whatever the situation, whatever the odds, everyone is capable of achieving more than they ever realise.