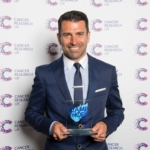 Former Southampton full back Francis Benali needs no introduction for fans of ’90s football. With over over 300 league appearances for the Saints, Benali became a fixture for the side and a well respected figure in the game.

Since retirement, Francis has gone on to work tirelessly for charities and foundations, regularly completing endurance challenges to raise money for Cancer Research UK. In addition to his charity work, Francis is a regular on Sky and BT Sport and a highly regarded motivational speaker. In 2014, he was the first recipient of the Barclays Spirit of the Game Award and was Just Giving’s Celebrity Fundraiser of the Year in 2015.