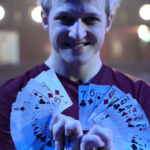 Alex Lodge is a close-up comedy magician who has performed on various television programmes and channels including BBC 1, Sky, CBBC and ITV 1 where he was featured on Britain’s Got Talent.

Talented with cards and coins as well as other objects including lemons, keys and rings, Alex has a hilarious patter that has been praised by a variety of industry sources including a coveted top review in The Stage.

Available to book as a close-up ‘mix and mingle’ magician or to provide a stage show that comprises of comedy magic and stage illusions, Alex is a multi-talented performer that is sure to impress.

Alex Lodge is one of the most popular comedy magicians and illusionists on the circuit today.